Harry Townsend’s report of the first ever GUCR. This is how it all started.

The Grand Union Canal Race was the logical way to celebrate the opening of the first British Waterways Walk along the full 145.4 miles of towpath bordering this great waterway: and since it coincided with the 200th anniversary of the opening of the Canal itself, neither Harry Townsend, Geoff Worsley nor Bruce Harding of British Waterways could ignore the chance to organise this race over the 145.4 miles from Birmingham to London. Geoff Worsley, as Race Director, did a great job. I travelled up with Worthing Harriers, reclining on a pile of mattresses in the back of a van with Laurie Bishop, Frank Rickus, Pat Cummins, Peter Wirzfeld etc. for a brief night’s sleep on a welcome floor and an early start.

Police seemed suspicious of a large gathering of men (and two ladies) taking off their trousers around the evocatively named Gas Street Basin at this early hour. Geoff Worsley gave the word (something like ‘Go’, although I didn’t actually hear it as I was selling a T-shirt at the time): and we were off! By ‘we’ I mean: Raymond Hoyle, Laurie Bishop, Pat Cummins, Alan Kiff, John McDonagh, Frank Rickus, Ian Hope, Peter Wirzfeld, Fiona Wycherley, Mike Morphy, Anthony Taylor, John Shreeves, John Haddon, Jim Sears, Dave Manderville, Richard Harwood, Bob McAdam, Richard Kearn, John Giblin and Harry Townsend.

Obviously checkpoints were out of the question, but everybody had their ‘passport’ from British Waterways and a key to unlock a number of boxes along the way which held a rubber stamp and an ink pad to check yourself in on the passport. Great idea: must try it on the SDW 80!

I won’t bore you with the details of how to scavenge food and drink, except to comment on a certain pub which advertised ‘Bar Meals 200 yards’ on the towpath. I hastened inside and asked for food. “We don’t do food any more”. “But it says…” I said. “Ah, they all fall for that”, replied the publican smugly.

It is, I admit, hard to lose your way along a towpath. Thirty miles on one bank, cross a bridge, and continue on the other bank to London. Similarly, it could scarcely be called a hilly course: there’s only one hill, 600ft high, and it takes sixty miles to reach the top.

Sadly, the towpath was not as good as British Waterways would have us believe: in fact, at times it merged with the water via the reeds. Three of us fell in, one twice and one headfirst: but as it was early in the day, there was plenty of chance to dry out before dark.

One by one we dropped out. After 50 miles, blistered, I hitched a lift to Northampton, rang Geoff (Race Control) and caught a train to London. I was the first to reach Little Venice: the enthusiasm of the excited knot of sightseers was beginning to ebb.

But in the early afternoon the unstoppable Richard Kearn arrived at a canter, 32 hours 49 minutes and 56 seconds after leaving Gas Street Basin: eight hours behind came John Haddon (40:30:00) and in the wee small hours Laurie Bishop and Richard Harwood came in third equal, too tired even to sprint for the line, in 45:59:00.

It was a great race: I desperately want to do it again and finish, as do all who dropped out. Same weekend in 1994?

Anybody else game to give it a try? 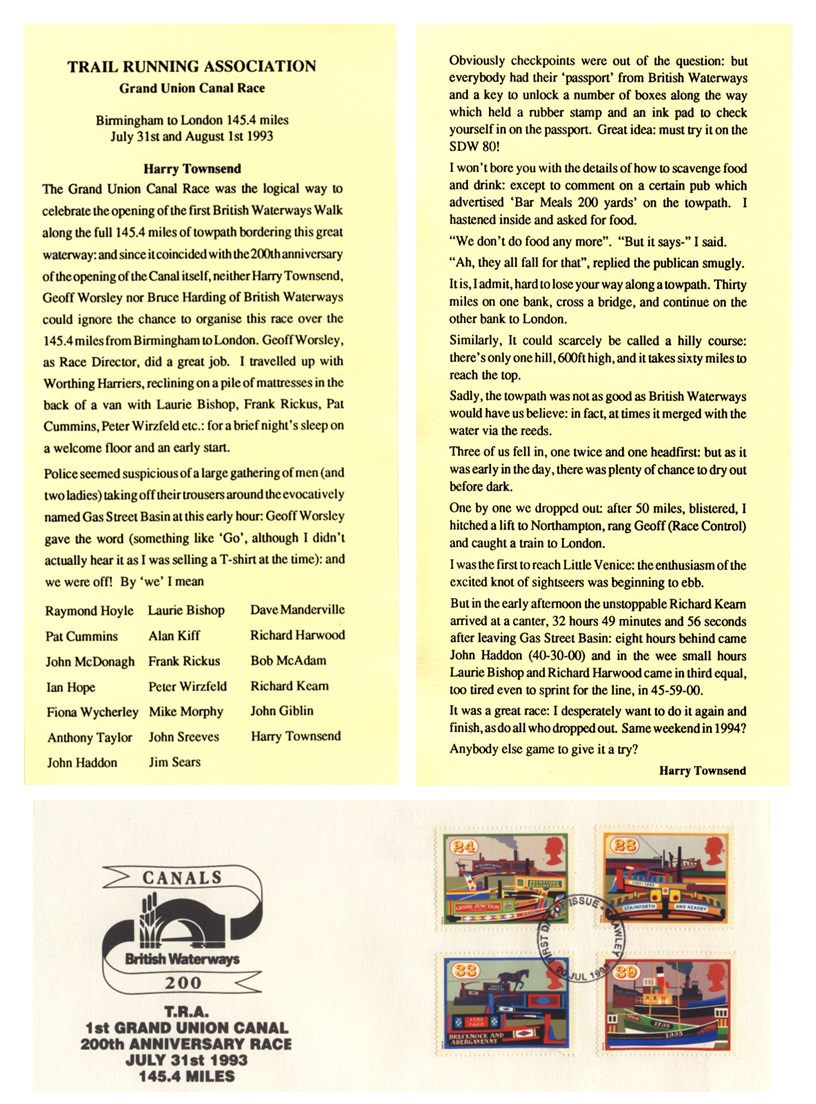